Perfect for vloggers, the Sony ZV-E10 pairs a large APS-C sensor and mirrorless versatility with a specialized feature-set built just for content creators. Improving upon the ubiquitous smartphone, the ZV-E10 is an Alpha camera that brings improved image quality, greater choice of lenses, and increased control to up your creativity when shooting.

Taking a concept that originated with the ZV-1, the ZV-E10 is the mirrorless continuation of this idea of a camera built around the concept of vlogging. It's a highly capable and portable camera but incorporates a series of design choices and shooting modes that are ideal for single-person productions. A vari-angle screen lets you accurately frame up shots, the integrated directional mic is purpose-built for recording more accurate sound from front-facing subjects, and shooting modes like Background Defocus and Product Showcase help you highlight specific subjects with ease.

In terms of specs, the ZV-E10 revolves around a 24.2MP APS-C Exmor CMOS sensor, which enables UHD 4K video recording up to 30p, Full HD recording at 120p, and stills shooting up to 11 fps. Sensitivity ranges from 100-32000 for working in a variety of lighting conditions and the sensor's design also integrates a 425-point Fast Hybrid AF system for accurate tracking and detection of subjects.

The body design is reminiscent of Sony's other Alpha E-mount cameras and features an intuitive control layout along with the functional 3.0" vari-angle touchscreen LCD for intuitive settings control and framing. With audio being a main concern of vlogging and creative content, the ZV-E10 focuses on this aspect of recording by including a 3-capsule directional mic into the camera design as well as incorporating both 3.5mm mic and headphone ports and having the top Multi Interface shoe support a digital audio interface for improved audio quality.

Rear 3.0" 921.6k-dot touchscreen LCD features a side flip-out design that is ideal for filming yourself or taking selfies in a natural and intuitive manner.

Side-opening screen allows for a redesigned top plate, which incorporates a directional 3-capsule microphone that is specifically designed for forward-directional audio recording. Also, a dedicated wind screen for the built-in mic is included to help achieve cleaner audio when working outdoors.

Front tally lamp serves as a visual indicator for when recording is occurring. Also, the LCD can display a red border frame to further serve as an additional recording indicator.

Live streaming is possible directly from the camera simply by connecting the camera to a computer or compatible mobile device via USB, allowing the camera's video and audio capabilities to be used for live social media and video conferencing. UVC and UAC standards are supported for improved picture and sound quality during streaming.

Product Showcase setting is ideal for vlogging and product review or demonstration videos and allows for quick and smooth focus transitions between a subject's face and an object placed in front of the lens.

Background Defocus lets you immediately switch to the maximum aperture setting of the attached lens, using a custom button function, for isolating your subject using shallow depth of field and bokeh.

Face-Priority AE detects the subject's face and adjusts the exposure to ensure the face is depicted in an ideal brightness, even if walking from a bright place into shade. The AE technology also suppresses abrupt changes in exposure if the subject quickly turns away from the frame to eliminate unexpected blown-out or extremely dark shots.

Refined color science helps to optimize skin tones for any subject, in both still and video modes, in order to achieve a healthy and natural look that is inclusive of different ages, genders, and ethnicity.

Soft Skin Effect can be used to soften and smooth wrinkles or blemishes on a subject's face to create a natural, smooth complexion. The default setting is Mid and can be adjusted to Off, Low, or Hi. For longer takes, extended continuous video recording is available when setting the Auto Power OFF Temp. function to High.

Movie footage can be tagged with specific metadata to indicate vertical recording orientation for direct playback in smartphone apps or for other instances when vertical video playback is needed.

Active SteadyShot is an advanced image stabilization mode that ensures steady video while moving, even when handheld shooting while walking.

A revised APS-C-format 24.2MP Exmor CMOS sensor realizes smooth, nuanced image quality with minimal noise and high sensitivity from ISO 100-32000, which can further be expanded to ISO 51200 for working in low-light conditions.

The sensor dimensions are approximately 3x larger than a 1" sensor, and up to 10x larger than some smartphone sensors, enabling greater sensitivity, reduced noise, and improved control over depth of field.

The sensor and BIONZ X processor combination also avails a top continuous-shooting rate of 11 fps with AF and AE and permits 14-bit raw file output for a wide tonal and color scale.

The sensor's design incorporates a 425-point Fast Hybrid AF system, which blends both phase-detection and contrast-detection methods to achieve focusing performance that is fast, natural, and accurate.

The on-chip focusing system covers 84% of the sensor field and is capable of achieving focus in as little as 0.02 sec.

Real-time Eye AF can prioritize focusing on human or animal eyes for ensured sharpness when making portraits. When selected, this function is activated by half-pressing the shutter button and you can further choose to prioritize either the right or left eye.

Real-time tracking utilizes AI-based algorithms to automatically recognize and track moving subjects. If Face/Eye Priority AF is on, this tracking method will further track a subject's eye or face in real time with seamless changing depending on the status of the moving subject.

UHD 4K video recording is possible up to 30p and uses full pixel readout with 6K oversampling to yield greater detail with reduced moiré and aliasing. Full HD 1080p recording is also supported in frame rates up to 120 fps, and both resolutions utilize the 100 Mb/s XAVC S format contained within an MP4 wrapper with 4:2:0 sampling. In addition to high-resolution internal recording, uncompressed HDMI output also enables the use of an optional external recorder for clean 4K recording with 4:2:2 sampling.

Slow & Quick (S&Q) mode allows shooters to capture Full HD video at specified steps between 1-120 fps. These settings will allow you to slow down action as well as speed up a slow-moving scene.

No recording limit for movie recording, allowing for longer takes and uninterrupted shooting of live events.

Affording extensive customizable color and gamma controls, the ZV-E10 allows users to adjust the gamma, black level, knee, color level, and more. Use the same S-Log2 Gamma Curve that is found on high-end Sony Cinema cameras, which squeezes up to 1300% more dynamic range into the video signal then traditional Rec. 709, for increased post-production flexibility. HLG (Hybrid Log-Gamma) support is also available, along with the BT.2020 color space, for recording within a wide color gamut and, in addition to S-Log2, S-Log3 is also available for producing an effective 14-stop dynamic range with increased grading control in the shadow to mid-tone regions of the image.

Interval shooting mode is ideal for creating time-lapse movies with the aid of Imaging Edge software. Intervals can be selected between 1-60 seconds for recording up to 9999 sequential free. Also, in-camera battery charging is possible via the USB port using a portable battery to benefit long interval shooting sessions.

Built for portable applications and one-handed use, the camera incorporates a large right-hand grip and intuitive physical control layout.

Grip design, along with the vari-angle LCD, also suits working from front-facing angles, such as when vlogging or taking selfies.

Vari-angle screen can be closed against the body, with the screen facing inward, to automatically power off the camera even when the power switch is set to 'On'.

Included NP-FW50 battery is rated for up to 440 shots or approximately 125 minutes of recording per charge. Power can also be supplied to the camera through the USB Type-C port or by using the optional AC-PW20AM AC adapter.

The ZV-E10 is also compatible with the Movie Edit add-on from the Imaging Edge mobile app.

The included E PZ 16-50mm f/3.5-5.6 OSS lens is a 24-75mm-equivalent zoom characterized by its versatile range and sleek, retractable design. Helping to deliver excellent optical quality throughout the range are an extra-low dispersion element and four aspherical elements to combat various aberrations and improve contrast. The lens also incorporates Optical SteadyShot image stabilization and a power zoom mechanism, both of which will help you capture smooth and steady stills and video. Additionally, it has an internal focus design, a minimum focus distance of 9.8", and uses a seven-blade circular aperture for smooth bokeh. 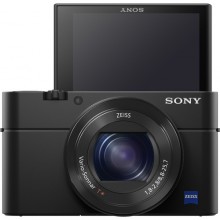 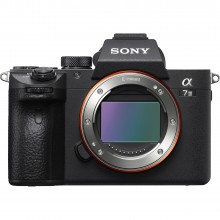 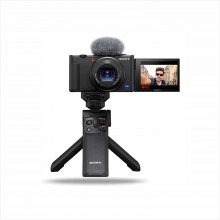 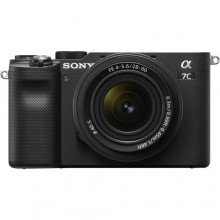 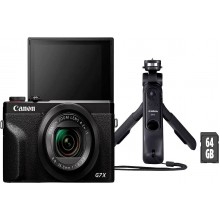 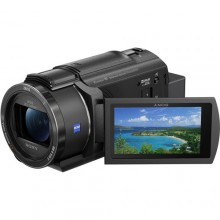 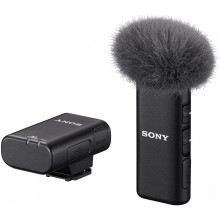 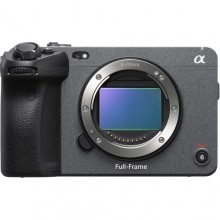